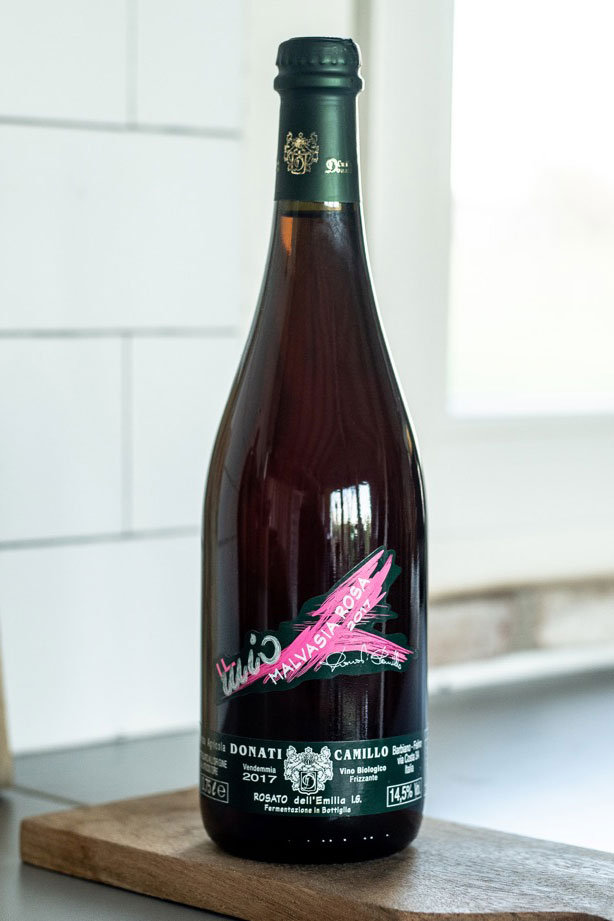 Since my mother went to Heaven in 2006, I deeply felt about dedicating her a wine, but I did notknow which one, what type, how…

Then, inspired by her name – she was called Rosa, although everyone knew her as Rosetta – I decided to make a dry pink wine. At this point I had to choose which vine variety to use and the choice fell on our Malvasia, because she liked it a lot – even if she preferred the sweet version – and also because I consider it a wine with a strong and unmistakable personality.

My intent has never been to make a rosé or a pink wine starting from my red grapes, as this would have involved vinifying the grapes in white, then clarifying them and finally filtering to reach the pink color: all operations to which I am clearly opposed!

So, to get to a pink wine as I want it to be done – that is, in a completely natural and non-invasive way – there was no other option than that of the blend. So, after some tests, in 2009 we managed to obtain our first malvasia Rosa, adding a 5% of a red grape variety to Malvasia. We have never revealed which red grape variety it is, not only to play a &quot;little game&quot; with our friends-customers,
but above all because it is really impossible to understand the identity of this 5%.

As a matter of fact, in 2009 we used one, in 2010 another one and a different one in 2011, but with the same identical result. This demonstrates that Malvasia Rosa has kept intact all the main characteristics of the vine Malvasia di Candia Aromatica, except of course for the color. Although this was not wanted, its extreme aromaticity has slightly been reduced compared to its sister, which makes it excellent also as an aperitif.

In conclusion, that’s why I will never say that we make a pink or a rosé wine, but simply a Malvasia Rosa, with the capital R as in my mother’s name Rosa!

For all the technical information – the pairings, the temperature and the recommended glass – I beg you to refer to that of the dry Malvasia.